What is Closed Loop Extraction?

Closed-loop extraction is widely considered the safest and most efficient means of solvent-based cannabis extraction, but how exactly does it work? And is it as safe as its advocates claim? While it certainly has notable advantages over its open-loop alternative, it has some distinct disadvantages as well.

In its simplest terms, closed-loop extraction is a method of extracting cannabinoids, terpenes, and flavonoids from cannabis in an enclosed environment. It’s a hydrocarbon extraction process that relies on solvents like butane, propane, or ethanol to separate the active compounds from the raw plant material. Closed-loop systems have been used for years to extract essential oils from plants, and that same technology is now used to make cannabis extracts like shatter, wax, batter, budder, crumble, and live resin. In a typical hydrocarbon extraction, the solvent is flushed through a solvent tank to absorb the cannabinoids and other active compounds from the plant material. The resulting solution may then be filtered into a collection pot for removal while the residual solvents undergo additional treatment. In a closed-loop system, the solvent has no contact with the outside atmosphere. It remains entirely within the enclosed system, traveling repeatedly between a series of tanks and ultimately purged within the system. A typical system will be equipped with pressure vessels, pharmaceutical piping, vacuum pumps (including a recovery pump), and assorted valves to recycle solvents. A simple closed-loop extraction might look like this:

This is an extremely simplified breakdown of how a closed-loop extraction system works. Additional steps and components may be required depending on the technician’s preferred method of refinement and purging. For example, a system may also be configured for winterization, complete with fine mesh filters designed to remove excess waxes and lipids from the extracted solution. If terpene separation is the goal, the system may include a separate centrifuge designed for this purpose.

An open-loop extraction system, or open blast system, works similarly to a closed-loop system, but it uses an open-ended tube. The initial process is the same as the closed-loop extraction process: the hydrocarbon solvent is chilled in a tank before passing through a chamber to dissolve cannabinoids and terpenes from raw plant material. Then the resulting oil is collected in a tank and heated to remove some of the residual solvents. But that’s where the similarities end. In a closed-loop system, the remaining solvent vapors are subsequently filtered and recycled for more complete purging. In an open-loop system, no such purging is done. The extracted oil is collected from the tank with some residual solvent intact. This is why closed-loop systems are highly preferred among hydrocarbon extraction technicians. Many places, like California, even require them by law.

While closed-loop systems are traditionally used with solvents like liquid butane and ethanol, supercritical CO2 extraction is also gaining popularity—especially in the CBD and vape markets. In this case, supercritical carbon dioxide assumes the role of the solvent. Supercritical carbon dioxide is a liquid phase of CO2 that results when carbon dioxide gas is held at or above its critical pressure and temperature. A closed-loop CO2 extraction system works similarly to a closed-loop hydrocarbon system, but it’s designed to accommodate the precise pressure and temperature controls required to keep CO2 in a supercritical state. CO2 extraction takes much longer than hydrocarbon extraction, but it’s considered more environmentally friendly because the same carbon dioxide can be recycled again and again. In addition, CO2 is a natural cleaning agent, so it automatically destroys any molds and other microbial bacteria during the extraction process. There’s also the misconception that CO2 extraction is cleaner because it doesn’t require the use of hydrocarbons. While it’s true that CO2 is cleaner than solvents like butane and ethanol, these types of solvents are still required during the post-processing of most CO2-derived extracts. For instance, ethanol is commonly used to winterize or crystallize extracts made with CO2. Once the processing is complete, the ethanol needs to be purged just like any other solvent.

Why Closed-Loop Extraction Is Popular

Closed-loop extractors are popular for a number of reasons:

But while closed-loop extraction is undeniably superior to open blasting, newer extraction technologies are proving to be even better for both labs and consumers. We’re talking specifically about solventless extraction.

The Problem With Closed-Loop Extraction

Closed-loop extraction is relatively safe and efficient, but it still relies on highly volatile solvents. There are a wide range of potential issues that shouldn’t be ignored. For instance:

The biggest problem, though, is trying to remove the residual solvents. Even as the solvents are repeatedly heated, evaporated, collected, and compressed, residual solvents commonly remain in the end product. Most labs use vacuum ovens to remove additional solvents during the post-processing phase, but even that isn’t a perfect solution. Some tests have uncovered cannabis extracts with residual butane levels measuring up to 50,000 parts per million (ppm). That amounts to about 2-5% butane in the final product. And while that’s an extreme example, it does illustrate how difficult and costly it can be to produce a truly solvent-free extract using a traditional hydrocarbon system.

In recent years, solventless extraction has emerged as a not only viable but preferable alternative to closed-loop hydrocarbon extraction. As the name suggests, there are no solvents involved. The cannabinoids and terpenes are separated from the plant using only heat and pressure. The resulting extract is commonly referred to as rosin. 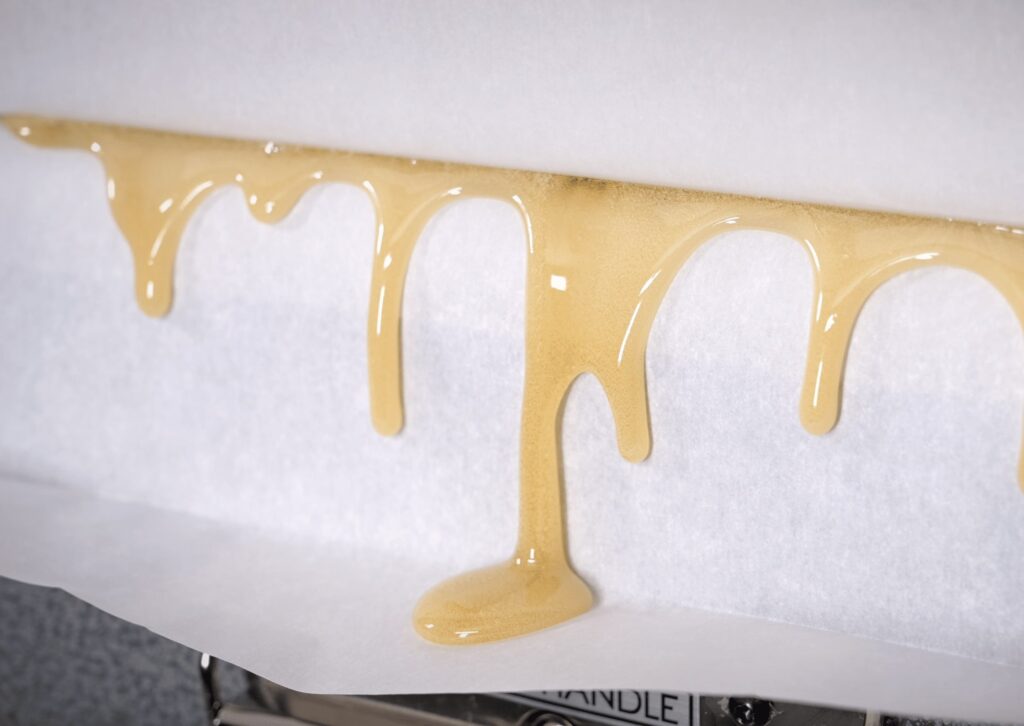 Rosin being extracted via heat and pressure on the PurePressure Longs Peak rosin press.

Instead of a closed-loop system, solventless extraction requires a rosin press. The technician places cannabis flower or hash between two heated plates, which are then pressed together using anywhere between 3 and 20 tons of force (depending on the machine and setting). The active compounds are separated from the plant in the form of a viscous resin, squeezed out from between the plates, and collected onto parchment paper. A professional-grade rosin press like the Longs Peak can press 80 or more grams of dry sift or hash—or 40 or more grams of flower—at one time. Solventless extraction offers a wide variety of benefits over closed-loop extraction. The following are just a few of the reasons why the cannabis consulting team at PureCannalabs commonly recommends solventless extraction:

Consumers are becoming a lot savvier about what goes into their cannabis products. When you offer solventless extracts, you can gain a competitive edge by building a reputation for quality and purity—all while offering dabs that are just as potent and mind-blowing as any wax or shatter on the market. So while closed-loop systems remain the best and safest solutions for hydrocarbon extraction, they don’t hold a candle to solventless extraction, which is fast becoming a preferred method in the concentrates market. We encourage you to explore the many benefits for yourself.